How Do I Feel About Weekends? I Feel Great.


Also FYI the song in the trailer is Black Skinhead by Kanye. As T said: "Anything you're doing you can do better if you're listening to that song." The song is completely uncivilized and so is the movie. 180 outrageous, offensive minutes. And that's why it's so good.

Rainy Saturday nights are meant for staying in and staying out of trouble. I Googled Wolf of Wall Street and I made chocolate-coconut "fudge." I call it "fudge" because it's adapted from Sarah Wilson's healthy, sugar-free recipe. It would be a little disingenuous to call it dessert. So I won't. But the fudge tastes pretty rich and the coconut is sweet, so it's satisfying. No photo for you. Fudge doesn't really photograph well. If you can photograph fudge and make it look good, well... let me know. We should hang out.

Sunday? Sunday was for Sunday things and getting Sunday things done: running and working. The sun was out and it was a totally different Boston. I couldn't have asked for a happier or lovelier run. 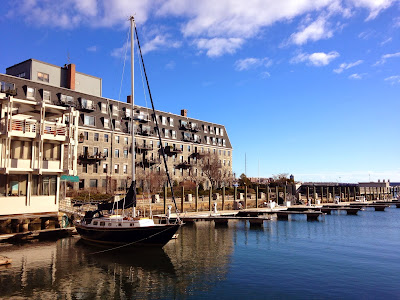 And that's a weekend.

Coconut layer: Melt the coconut milk and oil together in a saucepan over low heat until well combined. Stir in the shredded coconut and take the saucepan off the heat. Pour the coconut mixture into a square glass pan, smooth the top, and refrigerate for 20 minutes or until set. While you're making the chocolate layer, put the pan in the freezer so the coconut hardens a bit more.

Chill the bars in the freezer 5-10 minutes or until hard to the touch. Cut into squares. Keep refrigerated.
Posted by Run Fast Travel Slow at 8:27 PM