It's Okay (I Promise)

It's okay to realize your passport is expired. I'm talking massively expired, over a year expired, oops expired. So you print those forms and rush to the UPS Store to get your picture taken but they don't take passport photos anymore, so you run to CVS and get photos taken right by Aisle 5 (the seasonal aisle, the one with all the beach chairs and sunblock), and then you run back to the UPS Store to mail everything but, oh, they don't mail packages to post boxes, so you skip right on over to the post office at 5:25pm right before they close at 5:30, and you get that package sent priority with an "Adios!" and a "Sayonara!" and also a "Good riddance!" But it's totally okay, because, in three short weeks, that sweet new passport will be in your mailbox.

It's okay to get back from camping on the Harbor Islands Monday morning, after sunsets and tent sleeps. 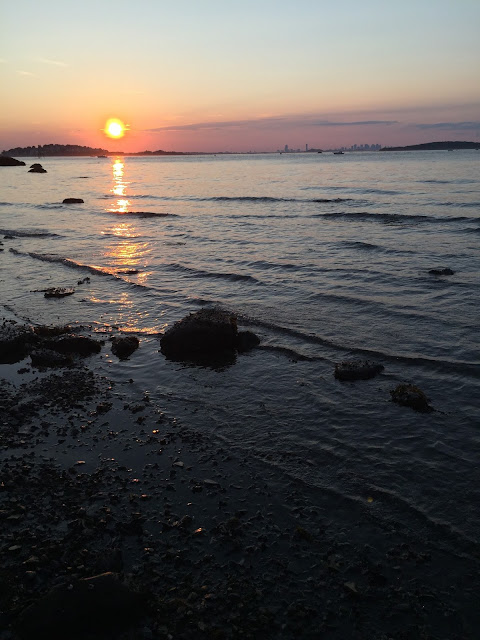 It's okay to wake up at 5:30am with the intention of leaving the house at 5:40 and being on the Summit Ave Hill at 6:30. It's also okay to realize immediately that your stadium-sore calves and your back - sore from camping and backpacking and about fifty too many burpees - aren't showing up to run hills today. No, they are not. So you re-set that alarm for 8am and you get an iced coffee and you go to restorative yoga and, yes, you go right ahead and take that iced coffee into slow yoga, and what a delicious, over-caffeinated oxymoron that is.

It's okay to act like a four year old and put yourself down for a nap, while your significant other/other half/better half teaches himself card tricks. And when you wake up from nap time, it's okay to declare that it's ice cream time and you get M&Ms on your ice cream because, remember, you're acting like a four year old today. But then you go to the corner store and buy broccoli for dinner, despite the protests of the aforementioned significant other/other half/better half, because, after all, you're almost thirty.