"You get to define success for yourself. It’s whatever personality you have that will probably affect how you define it. That’s the life you get to live."

Interview with Wharton Professor G. Richard Shell, author of Springboard: Launching Your Personal Search for Success. It's super refreshing to hear a b school professor talk about unconventional definitions of success and it made the goal-setter in me geek out hard.

Remember that time I meant to make ratatouille and made a tagine instead? Um yeah, me too. I may have made up the recipe out of necessity (it was dinnertime and I refused to go grocery shopping), but it's turned out be one of my most favorite and delicious dinners. My recipe, loosely inspired by Moroccan tagines, is also easy: chop, layer, bake. Let's keep it casual. When I say chop, I mean rough chop. And the recipe is forgiving too. Don't have squash? Use zucchini. Or eggplant. It's all good. And it's especially tasty with quinoa or couscous (whatever you've got kicking around). The only rule? When it's in the oven, just remember to give it a good stir once in a while. And play Tegan and Sara super loud. 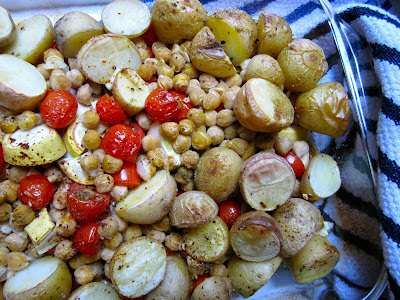 Preheat the oven to 400 degrees.