After our trip to Argentina, there’s been talk of making homemade dulce de leche. One recipe calls for continuous stirring for three hours. I volunteered my arm muscles.

But there is no way I will be making empanadas. Sure, they’re tasty and cute. I have absolutely nothing against empanadas, especially when they’re right out of the oven. 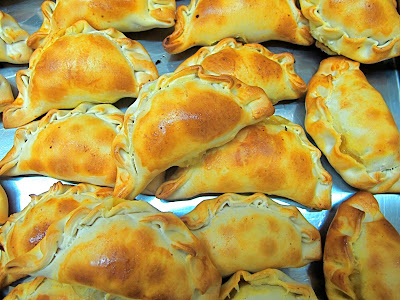 But, when we got a behind-the-scenes look at Essenza Pasteleria in Mendoza, I realized that there is so much skill involved. The filling is tucked into dough and the sides are pinched to create the half moon shape -- and it all happens in about five seconds.

I don't have that kind of dexterity. But I’m really good with a blender. And a cocktail shaker. So, what I’ve recreated at home so far are drinks: a pineapple licuado (smoothie) inspired by the licuados at the Park Hyatt Mendoza pool and a Metropolitan cocktail, which I enjoyed (twice) at Cluny in Buenos Aires.
First, the licuado.  We’d already been out for an early morning of sightseeing and we were happy to stretch out by the pool for a few hours. It was sunny and hot – another perfect Mendocino day -- and licuados seemed just right. 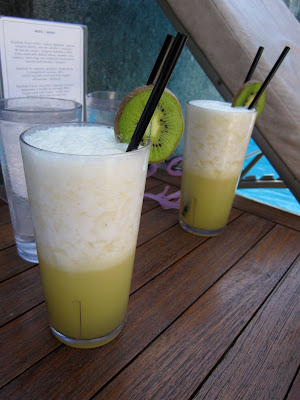 I’ve put my own twist on the drink, adding mint and substituting coconut water for milk. It’s light and very drinkable.
Pineapple-Mint Licuado:
2 cups chopped pineapple
1 to 2 teaspoons chopped fresh mint (amount depends on your taste)
½ cup coconut water
½ cup ice cubes
Blend all ingredients. Serves two, best accompanied by tango lounge music.
And now for the cocktail...
Cluny is a celebratory kind of place. By far, one of our favorite restaurants in Buenos Aires. 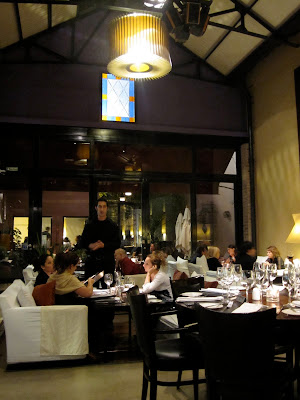 And the Metropolitan is a celebratory kind of drink. It’s pink (already a winner in my book), well-balanced, and makes you wonder why anyone would ever order a Cosmo.
But be careful -- there are a lot of recipes on the web, with some seriously strange proportions (2 ounces of Cointreau? That’s just crazy). And there’s also a cocktail by the same name that is brandy-based.
I’m sticking to Cluny’s version. Here is my best effort to recreate the drink.
The Metropolitan:
2 ounces Absolut Kurant vodka
1 ounce cranberry cocktail juice
1 ounce Cointreau
¼ ounce fresh lime juice
1 teaspoon simple syrup
Shake all ingredients well in a cocktail shaker with ice; strain into a martini glass. Makes one drink, but don’t be surprised if you’re asked to make more….
Posted by Run Fast Travel Slow at 11:32 AM