We decided that January was going to be (obviously) phenomenal. February was epic. March was outrageous. April was sassy. May was solid gold.

Then this little gem entered our lives.

And we love it.

We kicked off Memorial Day weekend with a picnic. I made sangria – a summery, fruity white wine sangria. 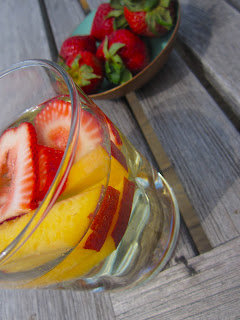 When B asked if it was solid gold sangria, I said no. It’s #ThisIsCrazy sangria.

June is #ThisIsCrazy. And I have a feeling that the whole summer is going to be too.

In a pitcher, combine the lime juice and simple syrup and stir well. Add the wine, peaches, and strawberries. Refrigerate for at least three hours. Stir well before serving.

How to make simple syrup:

I use the simple syrup recipe that is part of the official Kentucky Derby Mint Julep recipe. I make a batch (without the mint) and store it in glass Mason jars in the fridge.
Posted by Run Fast Travel Slow at 5:05 PM