All the Roads are Winding

The day is clear, the sky is the palest blue in patches and vivid in others, and there's just enough cool in the air to let us know that autumn might be coming soon. The streets are full, with runners, dogs, tourists, baby strollers, shoppers... I'm running along the side of the Common, heading towards the North End, but I know that its tiny streets will be too busy. I take the next right onto School Street. I randomly pick streets and head deeper into the Financial District, for a little space to run.

I run in a trance. I'm barely aware of the mechanics of running,  though a little twinge from my left hamstring is a reminder.  I ignore the cones blocking off what looks to be a construction site. But, just outside Winthrop Square, I'm stopped. It's a movie set. I'm told that it's the new Jeff Bridges and Ryan Reynolds movie. I jog in place and, eventually, filming stops and I'm let through. The square is quiet, with traffic diverted elsewhere, but, a few blocks away, business proceeds as usual.

When I was last in New York, I found a movie set near Grand Central. Vanderbilt Avenue was blocked off and transformed into New York of long ago. 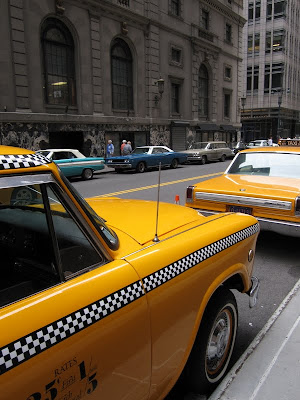 But back to Boston. I arbitrarily decide that I want to run to the South End. No good reason. I just do. I pass New England Medical Center and I cross the Pike. I have no destination and I unintentionally run in a circle, crossing the Pike again on Arlington Street. The view of Bay Village is not unfamiliar to me but it's still extraordinary -- red brick rowhouses with slate grey mansard roofs against the blue glass of the John Hancock skyscraper. It's as if someone Photoshopped Boston and saturated the color.

I spend a little time in Bay Village, finding my way to Park Plaza. I have no idea how far I've run. I'm not paying much attention to my watch or to stoplights... I run when there's no walk sign and I find myself running in place at a street corner, my mind wandering, when I do have the walk sign.

I run these streets to know them. In a few weeks, when someone mentions Herald Street or Winthrop Lane, I will know it. I run to see one neighborhood fade into the next and to find the connections between them. And I run because Boston is at its best today. There is so much happening, so much being played out on our streets and sidewalks. Outside Cheers, there was a bride in a huge, poufy dress, with white plastic sunglasses. Her bridesmaids, dressed in primary colors, carried sunflowers. In Bay Village, a shopper returned home by bike, with a Brooks Brothers shopping bag stashed in his basket.

I intend to trace Arlington Street to the river. But, looking down St. James, I see the corner of the Boston Public Library peeking out and I want to get closer.

And I'm off again.
Posted by Run Fast Travel Slow at 6:13 PM