Downtown Crossing: The Mingling of Past & Present

"Nature and man have combined to divide Boston into eight distinct and sharply defined districts, each with its own personality, its own flavor, and its own romantic history. Each district has its colorful past, its vivid present, and its promising future." -- George V. Weston, Jr. in Boston Ways (Beacon Press, 1957)

Downtown Crossing is a funny place. It is betwixt and between -- it is neither the Financial District nor Chinatown nor the Common. The jewelry stores and the fine Italianate details of the Filene's building remind us of Downtown Crossing's glory days -- when it was the place to shop and be seen -- but the massive hole in the ground nearby reminds us of its economically depressed reality. 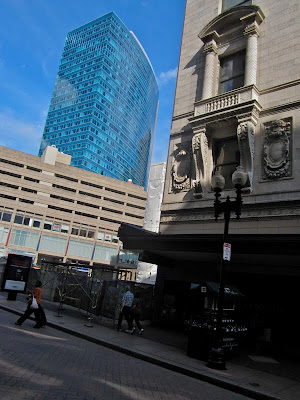 I move down Washington Street and across the invisible boundary between Downtown Crossing and the Financial District. Right in front of the soon-to-close Borders, a dance crew has set up. They energize the crowd ("Showtime! Showtime!") with flips and turns. And they're clever too: "Obama wants change... we want dollars!" 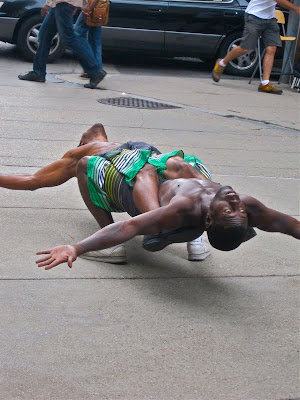 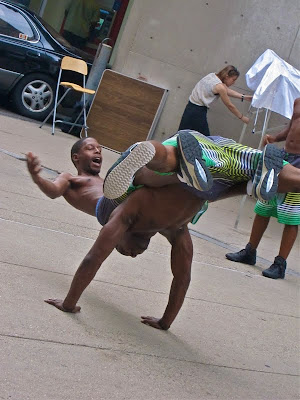 I retrace my steps and I cut over to Tremont Street. At Thinking Cup, I don't hesitate. I haven't had coffee yet today and I want an iced latte. I'm thrilled to see that Thinking Cup brews Stumptown -- it's the first cafe in downtown Boston to carry Stumptown. I know where I'll be buying my beans from now on. The barista looks up, calls out my name, and knocks two shots of espresso into the waiting cup of milk, ice, and foam. 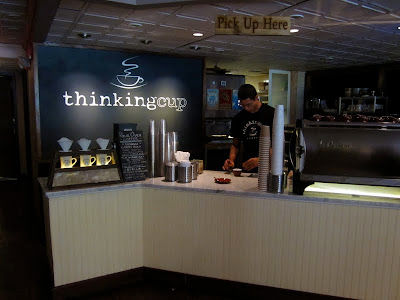 The cafe -- glass topped tables, brown leather banquettes, and black chalkboards -- is a welcome addition to the area, where there are few independent coffee options. Customers are a mix of college students -- all Converse sneakers and spiral notebooks -- and businessmen. There's a hum of chatter and the music goes straight from Thievery Corporation to Ella Fitzgerald. I like it and I want to come back to have the French Hot Chocolate.

I come back the way I came. And there's lots to stop and look at.


On West Street, I stop short when I see the carts and bookshelves of books that have taken over a small parking lot. Totally retro psychology and sociology textbooks, political texts, classics and books of poetry in metal carts, against brick walls and a true blue sky. 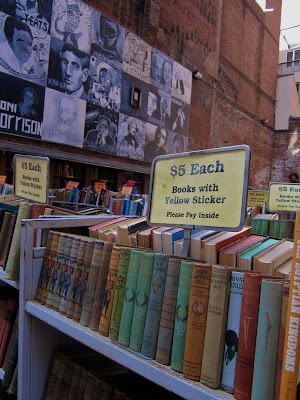 I find a 1957 book entitled Boston Ways, a history of this city with black and white photographs. 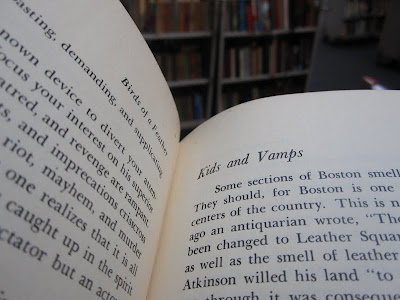 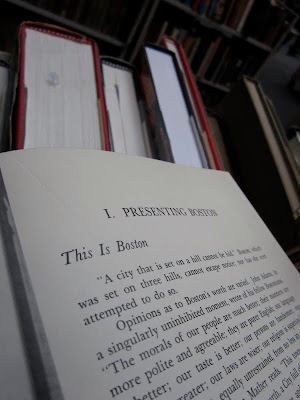 What is its future?
Posted by Run Fast Travel Slow at 10:02 PM