We walk to 303 Cafe, with Roxie leashed up. The inside is all shiny wood and exposed brick, but we can't sit inside with the dog. The cafe couldn't be nicer and, when there are no outside tables left, the hostess brings a table and chairs out to the sidewalk. We're so happy and Roxie is too.

Our waitress laughs: "You've expanded the cafe!" I'm tempted by the omelets and the tuna melt, but I want something a little smaller. We order smoothies -- mine is the (non-alcoholic) Pina Colada with pineapple and coconut milk -- and we share the MidEast Antipasto. It's a perfect dish to share -- pita chips piled high, olives, a few moist falafel, and little saucers of hummus, tzatziki and tabbouleh. I wish that I had my camera. I really do. Because the sky is blue, and the street is quiet, and my smoothie is delicious. And I don't feel like I'm in Boston anymore.

With Roxie in tow, we head for the tennis court at Jeffries Point. We set the dog up in the shade with a bowl of water and a stick to chew on. We play, zinging the tennis ball across the net. When I look back at Roxie, she's sitting there happily, watching the game. She's such a sweet dog.

When we realize that it's late, we hustle back, drop off Roxie, take the fastest showers ever, and get in the car. We're trying to make it to the South End and traffic is bad. There's a lot of swearing and gesturing coming from the driver's seat. I don't drive in Boston and I'm no help. So, instead, I flip the mirror down and I put on some blush.

We've missed SoWa and we're hungry. We decide to go to The Gallows. I like The Gallows much more than expected. There are a few macabre touches -- skulls and small bird statues -- in keeping with the name and the dining room is beautiful, with walls of light wood planks.

And what do we share? Its version of a Mediterranean platter: the Farmer Platter. Smoked chunks of eggplant, cherry tomatoes and thinly sliced onions, yogurt and chickpeas, quinoa with plenty of parsley, and a little hunk of cremont cheese. The eggplant has a little bite to it, which is especially good paired with the tangy, gooey cremont. The cheese reminds me of the chevre I had so often in Paris... it's not crumbly like the goat cheese that we're used to here in the States.


The bartender is hilarious and enthusiastic ("I've been here since 9... I love it!"). The cocktail menu reflects the move in Boston towards what I'll call crafted cocktails -- lots of playing around with bitters and infused liquor. We have a drink a piece -- mine is the Shanghai Mojito. I don't taste the lychee, but it's a great, refreshing mojito and not too sweet. 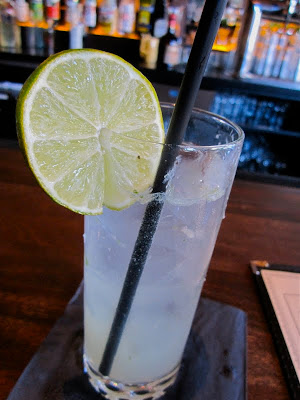 The bar is getting busier. But, since it's Sunday and we're a little tired from the sun, it's time to go home.
Posted by Run Fast Travel Slow at 4:34 PM