I'm meeting E and others on the Esplanade for the fireworks. They're bringing iced tea and snacks.

And just like that, I've got an excuse to bake.

I want a really specific kind of brownie. I want Katharine Hepburn's Brownies. But with a cheesecake layer. I'm inspired and I don't have to think too hard. I make the brownies as usual and smooth a layer of cheesecake over the top. The result?  Dense, dark brownies with a light layer of tangy cheesecake. 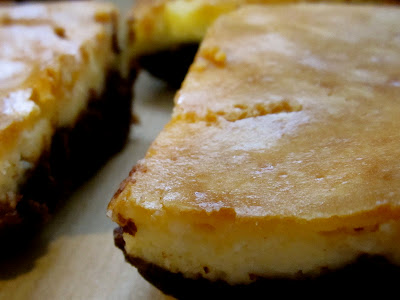 I wrap them up in tinfoil and I get on the T. The game has just let out and the T is full of Sox fans... all dark blue and red. And pink too -- everyone is sunburned. I've got the brownies propped on my lap and they jiggle as the train jerks through the tunnels in starts and stops.

I walk through the Common, up Park Street, along the side of the State House, down Bowdoin, to the intersection of Charles and Cambridge. It's 6:30, but the sun is still hot and I've got plenty to carry.

By 7, we've got a spot staked out on the Esplanade -- three blankets spread out side to side, dotted by bags of pretzels and kettlecorn, a thermos of iced tea, our flip flops, cookies, and, oh yeah, the brownies. The others teach me to play Spades (I have no strategy and I'm the most erratic card player ever... which makes me dangerous) and we Google Martina McBride when she takes the stage. 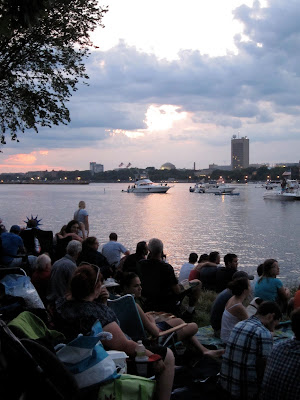 It's 10:30. We stand up and watch the fireworks through the lacy silhouette of the trees along the riverbank. 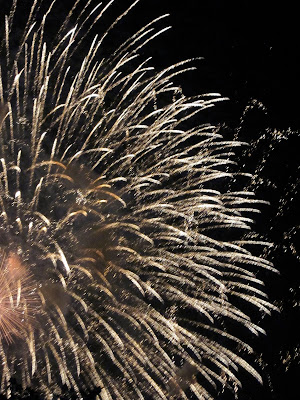 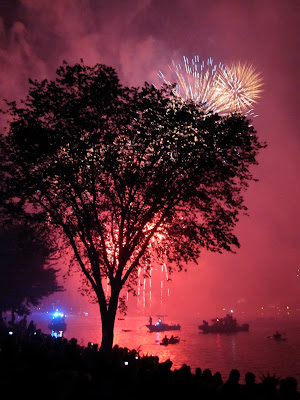 There are 800, 000 people on the Esplanade. That makes for some traffic jams. We wait to cross a bridge to Back Bay and people-watch... drunks rehashing a fight, cranky grandparents and babies up past their bedtimes. Most of the crowd has to work tomorrow but there's still a few hours of the holiday left. 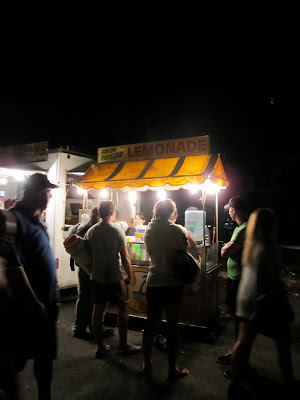 And then, at midnight, we ring in E's birthday.

Butter and flour a square baking pan and set aside. Preheat the oven to 325 degrees.

Melt the butter and chocolate in a saucepan over moderate heat, being careful to not let it burn. Mix the two together and take the saucepan off the heat.

Stir in the eggs and sugar, mixing well after each addition. Add the flour and stir well.

Turn the brownie batter into the prepared pan and set aside.

Beat the cream cheese, sugar, and vanilla in a medium bowl with a hand mixer. Add the egg and beat well. All ingredients should be well incorporated and the mixture should be creamy. Carefully spread the mixture on top of the brownie batter.

Bake the brownies at 325 degrees for an hour and forty-five minutes or until a toothpick inserted in the middle comes out clean.

Let the brownies cool in the pan until they reach room temperature and then chill the brownies in the freezer for one hour. Run a knife around the edges and then cut the brownies.
Posted by Run Fast Travel Slow at 10:01 PM