I woke up excited today. Could anything be better than a new hand mixer? Nope.

Even before I bought the hand mixer, I knew what I would make first: Cupcakes.

But I didn’t have a chance to use the mixer right away. There were a lot of reasons why: a few evenings working late, a totally alarming amount of laundry, and a pint of cookies n’ cream ice cream.

Plus you know, I've been busy: three hours learning how to use knives, a showdown with Comcast, and a five-mile training run for the B.A.A. 10K race on Sunday.

Waiting to open the hand mixer box was like putting off Christmas morning.

Friday afternoon rolled around (finally!). Time to cupcake! As far as the outside world was concerned, I was gone. Gone cupcake-ing.

The recipe I adapted from 101 Cookbooks was originally for coconut cupcakes. I usually don’t make changes when I make a recipe for the first time. But I did this time. 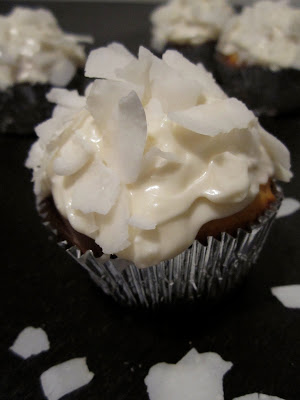 Tasting the batter and the frosting often, I poured in more vanilla extract, decreased the amount of confectioners’ sugar, increased the sour cream and the cream cheese, and piled on the coconut.  The sour cream cupcakes taste like vanilla cake but are much denser; the sweet cream cheese frosting is a little tangy and flecked with coconut.

Once the baking was all done, I realized I hadn’t thought out the logistics. How am I going to transport twenty cupcakes to Cambridge tomorrow?

In an aluminum Thanksgiving-turkey-sized roasting pan, of course.

Sift the flour, baking soda, and salt into a medium bowl.

On low speed, alternately add the sifted flour mixture in three additions with the sour cream in two additions (beginning and ending with the flour).

Fill the cups with batter, not filling them all the way to the top. Bake for 25 minutes, or until a toothpick inserted in the middle of a cupcake comes out clean.

Cool for 15 minutes in the pans, then remove the cupcakes and let them cool completely before frosting.

Beat the cream cheese and the butter in a large bowl with a hand mixer on moderate speed for 1 minute. Blend in the vanilla extract and the heavy cream.

On low speed, blend in sugar in three additions.  Blend in the 1¼ cup of coconut.

Frost the cupcakes (I use a dinner knife). Sprinkle the 1½ cup of coconut over the cupcakes. Keep cupcakes refrigerated.

This recipe makes a lot of frosting. You can go wild and really load on the frosting. But, if you’re transporting cupcakes in a roasting pan by subway, you might want to frost a little more lightly.
Posted by Run Fast Travel Slow at 11:20 PM