That can’t be a surprise, really. I mean, look at the name of the pie.

Boston can’t make too many claims to original desserts. New York Style Cheesecake is out. So is Mississippi Mud Pie.

Another fun fact: You can learn to make Boston Cream Pie at Flour Bakery.

After the B.A.A 10K and blueberry pancakes yesterday, I showered, chugged a liter of water, and made the walk from South Station to Fort Point. This is completely normal, right? To set a personal best in a 10K and then take a baking class?

I don’t do anything half-hearted when it comes to running or food. Or note-taking. Because, as Executive Pastry Chef Nicole Rhode and Pastry Chef Sarah Powers walk us through the steps in a demo-only class, I’m taking notes like there’s going to be a quiz.

In my 6th grade European history class, we had our first test about two weeks into the school year. I panicked and asked my teacher if we were really going to be tested on all the material. I showed him my twenty (double-sided) pages of notes. Here’s another fun fact: most 6th graders don’t take forty pages of notes. At the end of the school year, my teacher asked if he could keep my notebook.

Yesterday was no different. My copy of the recipes is covered with exclamation marks, notes, underlining, and arrows. I was highly motivated. I really love Boston Cream Pie: I bake it, I eat it, and I want to master it. And Flour set out some of its excellent coffee for the class and I plowed through two cups scary-fast. So I was excited and buzzing and all ready to tackle some pie.

Sarah and Nicole are pastry professionals, so, of course, the recipe looks easy. But I really think that it is straightforward. The pastry cream (milk, egg yolks, sugar, salt, cake flour, and vanilla extract) takes less than fifteen minutes to make. I’m used to Maida Heatter’s recipe, which calls for lots of stirring and watchful waiting, and Flour’s version seems much faster, but, hey, that’s never a bad thing.

Our instructors mention that the pastry cream is the same one used in Flour’s tiramisu and they brainstorm – maybe we’d want to stuff brioche or doughnuts with the leftover cream? And, as it happens, Sarah actually offers us doughnuts between recipe steps. Mine is gorgeous, dipped in granulated sugar, and bursting with raspberry jelly. I’m totally distracted. 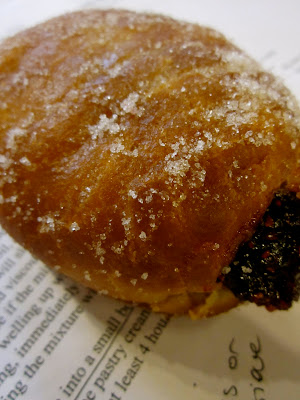 They pull out a golden brown sponge cake baked earlier in the day and show us how to assemble the three layer cake: brushing coffee syrup and pastry cream over each layer of cake, and then finally pouring dark, shiny chocolate ganache over the whole thing. 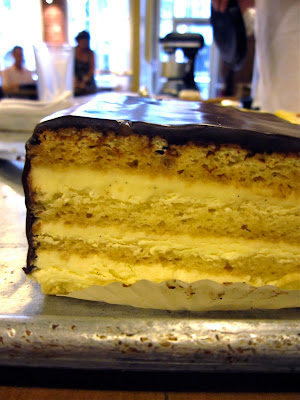 Because it most reminds me of tiramisu. Between the multiple layers, the coffee syrup, and a filling that tastes more like whipped cream than a standard pastry cream, we’re definitely headed into tiramisu territory. (This is not to detract from the fact that it’s sweet and creamy and I would happily take another piece.)

So what’s the line between a Boston Cream Pie and tiramisu? When I ask Nicole, she says that a tiramisu usually relies on ladyfingers and a mascarpone cream laced with rum. True. But the Boston Cream Pie (traditionally a sponge cake cut in half, stuffed with vanilla pastry cream so thick that it’s practically pudding, and doused with a chocolate glaze) has been re-interpreted many times. And tiramisu has been re-interpreted too. And now we’ve got some overlap in taste.

I’m thinking that I need to go to the Omni Parker House Hotel to have the classic. I need to establish a baseline for my research. (This is a high class problem to have.)

Moving on, Sarah and Nicole also teach us the recipe for Strawberry Cream Cake, another spongecake dessert. The filling – sweet strawberries, a tart lemon syrup, and cream cheese whipped with vanilla and heavy cream – is tightly rolled up in a single layer of sponge cake. I’m sold. I think it’d absolutely be a terrific dessert to make for a party: It’s simple and it tastes like summer. And the cream is practically turning pink from the strawberry juice. I love it.

The instructors send us home with little white boxes of cake. Mine has a big, blue Flour Bakery sticker and attracts some attention (“I see you went to Flour!”) as I make my way home.

So what’s on tap for tonight? I’m eating the rest of my strawberry cream cake, obviously. And looking for an excuse to make a sponge cake.
Posted by Run Fast Travel Slow at 9:40 PM