Leaving Sweet Behind for Savoury

As you know, there’s been a lot of baking around here recently.

I started to crave something savoury and I declared last night, “I’m making dinner tomorrow!” (No one put up a fight.)

Come lunchtime and face-to-face with a full CSA box, I decided to start cooking. Lunch was a fresh and simple salad for one; dinner for three was a rich Spanish tortilla, with flavors of early summer.

Whisk the rice vinegar, hoisin sauce, and sesame oil in a bowl. Combine the chicken, cabbage, and dressing and toss well (One method is to combine ingredients in a Tupperware container, put the lid on, and shake.) Arrange the salad on top of the rice.

(Adapted from Gluten-Free Girl and the Chef) 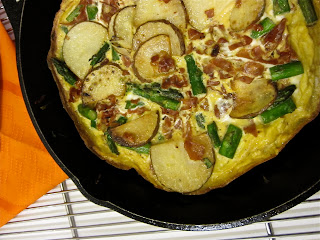 
Whisk the eggs and black pepper in a medium bowl; set aside.

Cover the russet potato with water in a saucepan; bring to a boil. Boil the potato until it is fork tender (approximately 3-4 minutes). Cut the potato into thin, half-moon pieces.

Heat 1 tablespoon of olive oil in a medium cast-iron skillet over medium high heat. Cook both sides of the potato slices until golden-brown (approximately 2 minutes per side). Set aside and turn heat to medium.

Add the prosciutto slices and cook until they are slightly crispy (approximately 3 minutes). Set aside.

Add 2 teaspoons of olive oil and heat. Add the asparagus and cook them until green and tender (approximately 1-2 minutes depending on thickness of stalks). Set aside.

Turn heat to medium low and add the shallot. Cook, stirring, until the shallot begins to brown (approximately 3-4 minutes).

Stir the prosciutto, asparagus, potato, and shallot into the eggs.
Add 1 teaspoon of olive oil to the skillet and heat until the oil moves around easily. Pour in the egg mixture and cook for 2-3 minutes until it is set. Lift up the tortilla with a spatula and shake the pan back and forth to allow runny eggs to run to the bottom.

Slide the skillet into the oven and cook until the top is firm (approximately 5 minutes).

Take the tortilla out of the oven and sprinkle the basil on top.